When it comes to rock festivals of the late ‘60s and early ‘70s, everyone generally knows about Woodstock, Altamont and Monterey Pop. However, during this time period, while giant music festivals were still a fairly new thing, there were dozens and dozens of similar events all around the world that have since, despite boasting remarkable lineups, faded into relative obscurity over the years.

So for every Friday this summer, I will be writing about one such overlooked festival from the classic rock era. I will try to not only describe each event but also point you in the direction of any available (officially or otherwise) audio and video releases. If you or anyone you know have been to any of these festivals, please comment on that post and share your stories! I’d love to hear from you.

For our first entry, let’s talk about a rock festival that is so obscure that it didn’t even happen. That’s right, I’m talking about the Powder Ridge Rock Festival of 1970. Before there was the ill-fated Fyre Festival there was Powder Ridge….

Scheduled for July 31st-August 2nd, 1970 at the Powder Ridge Ski Slope of Middlefield, Connecticut (of all places) the PRRF was billed on the poster as the perfect three day weekend get away with free camping on “300 beautiful acres of woodland, including a lake and streams” along with “low cost food concessions” and “lots of water fountains and over 400 of those fabulous portable toilets that you learned to love at Woodstock” (Port-o-San?!) The line-up over the three days was simply phenomenal. In bright red ink, the poster blasted out names as famous and diverse as Sly & The Family Stone, The Allman Brothers, Van Morrison, Little Richard and many others. The magic, golden ticket to these three days cost only $20.00.

This had the makings of a truly legendary gathering with enough good vibes to inspire a generation. Unfortunately, this was not to be as the town’s citizens pulled the plug at the last minute and the event was cancelled.

Even though nearly every group got the word and turned back and despite the fact that the police put up warning signs and notices wherever possible and apparently even announced that they would arrest any musician that would take the stage, stopping the ever-advancing audience was futile. Eventually, a reported 30,000 or so crowd showed up to the natural amphitheater and were greeted by nothing. No food. No bathrooms. No music.

The only thing these thousands of kids had to do for what must have felt like ages were hard hallucinogenic drugs. Every account about the festival mentions a psychedelic fall out that sounds straight out of the darkest moments of Fear and Loathing in Las Vegas.

So you have thousands and thousands of bored, disappointed young people, blasting out of their skulls on potent psychedelics all gathered in a plot of land in an area where none of the locals wanted them. It’s actually a damn miracle that it didn’t explode into a bloody riot. Thank god nobody called in the National Guard to clear the hill, things could have become a great deal uglier and fast.

Eventually, a few local bands helped to cool things over by sneaking into the festival grounds under the cover of darkness with their gear. Melanie Safka, who famously played through the rain of Woodstock the year before, also smuggled herself in and through the magic of hotwiring two ice cream trucks to generate power for her amps, she serenaded the huddled, cheated masses. Between Powder Ridge, Woodstock and the Isle of Wight and Glanstonbury Fayre, Melanie was kind of the angel of music festivals. 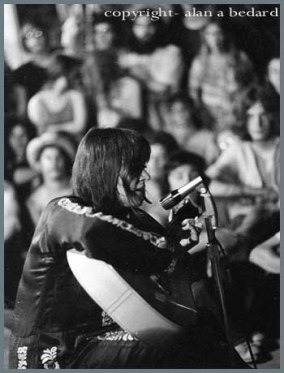 (Images by Alan A. Bedard)

You can hear her speak about this here:

A gathering as large and complicated as a music festival seems like it just has to be well managed in order to exist, but events like Powder Ridge, Altamont and Fyre show that even something that large with that much money behind it can be easily unraveled without a moment’s notice.

Weirdly enough, the festival was revived in 2014 as a family fun event featuring small, local Connecticut groups and vendors. It’s not exactly the way I would have expected the ski slope to remember its past, but I suppose it’s better than pretending that it never happened at all.

(apart from the previously mentioned Melanie and a few local bands, nobody actually performed at Powder Ridge, but this is who were advertised)

-Sly and The Family Stone

While there has been some talk over the years about making a documentary about the doomed festival, it looks like funding became an issue and the project was shelved. A Casey Hardison created a short, mini-doc about the festival, called When The Music Stopped and you can view it on Vimeo, right here.

Other than that, here is a collection of home movie and news reel footage taken from the festival available via YouTube

Well, no since there wasn’t much music to begin with. 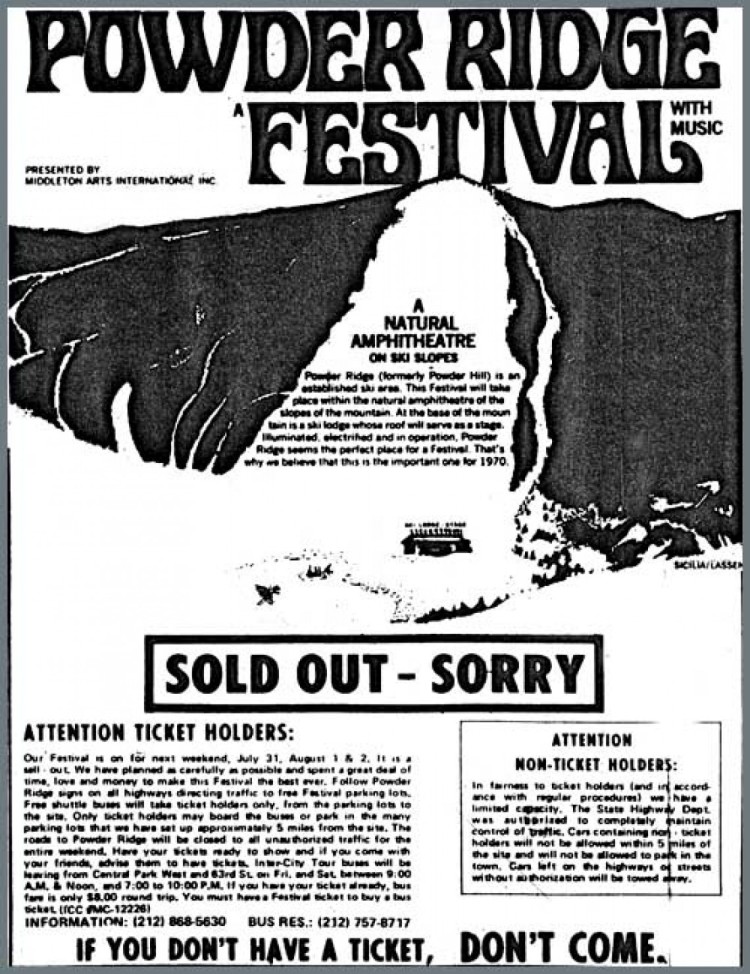