The story of this festival should honestly be made into a movie, kind of like Taking Woodstock, only more. I’m sure it would be just as dramatic and hilarious…

Held between August 7th and 10th of 1970 at Mosport Park Raceway in Bowmanville, Ontario, Canada, the Strawberry Fields Festival was originally intended to be John Lennon and Yoko Ono’s Toronto Peace Festival, but after their applications and other legal permits were thwarted, the Lennons gave up and their co-promoter, John Brower, moved forward to host the event in New Brunswick only to be halted by more politics.  Then Brower had the genius idea of moving it to the Raceway in Mosport Park but while disguising the festival as a motorcycle race that just so happened to have some entertainment. What balls.

Apparently, in America, it was advertised as a rock festival, so thousands of kids tried to cross the boarder in order to attend. Unfortunately, many had to be turned away, mainly due to not having enough cash. According to Wikipedia, one person drowned while attempting to enter Canada via swimming the St. Lawrence River, after being turned away from the boarder. 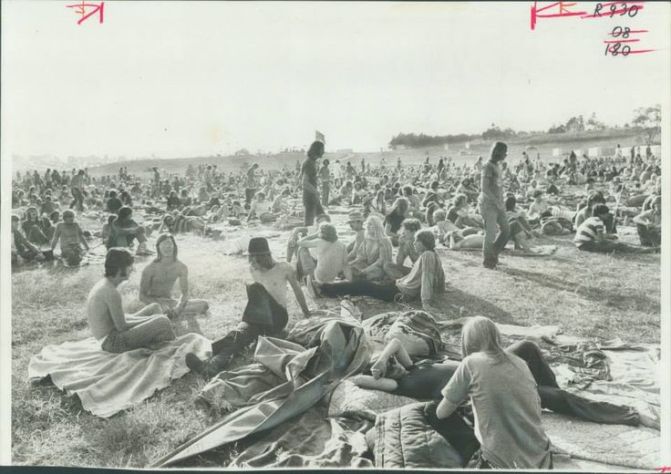 On ganghistory.tripod.com, one fan, Philip Gangi, describes a harrowing scene while faced with the border guards.

“After hitchhiking all day, John [Kearon] and I finally reached the Canadian border north of Niagra Falls, New York, around midnight. Our last ride was with a young newlwed couple. The border patrol asked to see everyone’s identification. Everyone showed them their id. When they got to me I got a little nervous, but decided to tell them the truth. “I don’t have any id with me,” I said. “The disc jockey on the radio said that all you needed was a ticket.” The border partrol people said, “don’t you have anything? A library card or anything at all that has your name or address on it?” So I proceeded to explain to them how I lost my wallet a month earlier and since the deejay said that all I needed was a ticket I figured I would leave my wallet at home so I wouldn’t lose it.

The border patrol orders the driver to drive around the closed check point booths, make a U-turn and take me back into the United States.

This has got to be the most spontaneous of my life. I said to the driver, “when you make the U-turn go slow. I’m going to jump out and run across the field and climb over the fence into Canada.” And sure enough that’s what I did. I ran so fast I could feel my heart beating. I thought they were going to have searchlights on me at any second. When I got to the fence I threw my backpack over first, then I struggled for a moment and made it over into Canada. I ran to the road and started hitchhiking.

John says that the first car that came by was a cop who picked me up and did’nt even realize that I had just climbed the fence. But I don’t remember that. I do remember meeting up with John the next day at the concert.”

Once it was discovered by the local politicians that this wasn’t a little motorcycle race, they tried to shut it down at the last minute. Luckily, it was finally decided by the Supreme Court Justice to leave the festival be, shortly before the official start time for the performances.

Photo by the aforementioned John Kearon (and our hero, Philip Gangi is featured in the bottom right of the photo)

Groups as diverse as Jose Feliciano, Cactus and Alice Cooper graced the stage but John & Yoko and the advertised Leonard Cohen and Led Zeppelin, unfortunately did not. 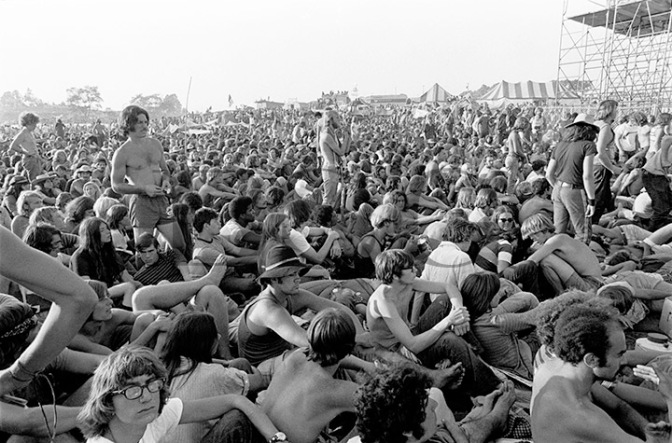 The festival itself seemed to defeat the odds and went rather peacefully. There was even a few motorcyclists that spun around the track a few laps, so Brower wasn’t a total liar after all…Wikipedia says that a highlight was Sly & The Family Stone closing the event by blasting “I Wanna Take You Higher” as the sun rose. That sounds like it could possibly top The Who’s sunrise performance at Woodstock.

No official film has been released as of yet. It would be really great to see that Sly & The Family Stone performance, though.

Here’s what’s floating around YouTube at the moment, though.

and a slideshow featuring some great photos taken at the festival

Frustratingly, the festival was supposedly completely recorded and yet nothing has been released. Why this is a reoccurring theme with some of these festivals is beyond me. However, the only thing that I can track down is a bootleg of an audience recording of a few tracks of Ten Years After’s performance.

I’ve also heard many great things about Alice Cooper’s set and that it’s highly regarded by some diehards. I know it’s not much to go on, but maybe that reputation will garner enough interest someday for someone to dig up any of these soundboard tapes and let any of this music see the light of day again.

Come back next week at another racetrack (but with plenty of music this time, I promise!)