It’s finally September 1st, so that means that the summer season is finally at a close and so is Festival Fridays. From gigs that failed so hard that they didn’t even happen to performances that would end up being highlights of some artists’ career, I hope that you’ve enjoyed reading about some of the other noteworthy festivals of the ‘60s and ‘70s that live in the shadow of Woodstock and Monterey Pop.

Seeing that today’s the last entry in this series, I thought I’d round up some honorable mentions that I had wanted to get to but couldn’t either due to time or lack of information. I’ll try to accompany each mention with at least one video, if any are available. 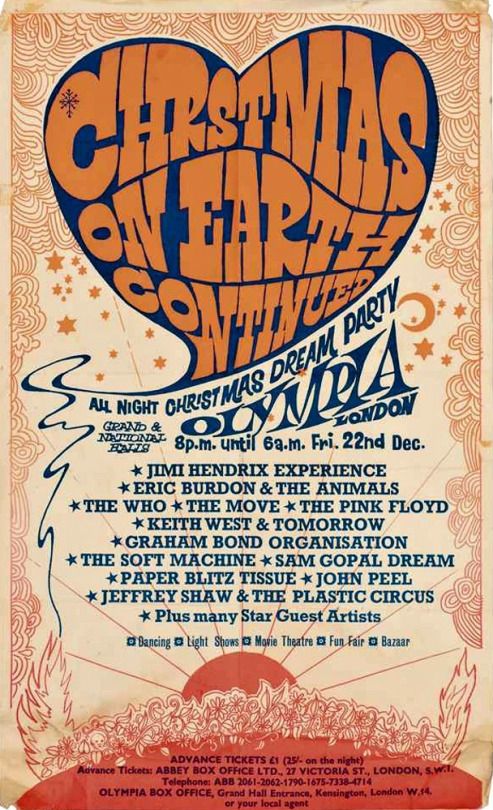 A short little festival held at the London Olympia with Pink Floyd, Jimi Hendrix, Soft Machine, Tomorrow, etc. Two stages were set up across the venue and bands would perform simultaneously. Syd Barrett was unraveling and unresponsive on stage at this point, so it’s no surprise that recordings of Floyd’s set are impossible to find while clips of other bands still exist.

Here’s a clip from Traffic’s performance: 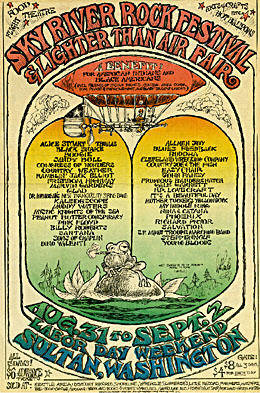 Held annually from 1968-1971 at a raspberry farm near Sultan, Washington, the Sky River Rock Festival was known for being the first multi-day event of its kind on a previously undeveloped site, paving the way for Woodstock and The Isle of Wight. The first iteration featured a huge and varied lineup that included the likes of: Country Joe and The Fish, Peanut Butter Conspiracy, Frumious Bandersnatch, Santana, H. P. Lovecraft, Muddy Waters, Sandy Bull, Flamin’ Groovies and Ramblin’ Jack Elliott. A major attraction for this first festival was also the dropping of a piano from a helicopter.

The Grateful Dead also made an appearance at the ’68 festival and here’s a superb-quality bootleg of their entire set:

Held in Northridge, California and NOT in Newport, Rhode Island (like I had originally assumed) the ’68 festival was the first concert to exceed 100,000 paid attendees while the second festival had twice as much and ended up being the biggest musical event until Woodstock.

The ’68 festival featured: Alice Cooper, Tiny Tim, Sonny & Cher (?!) Blue Cheer, The Chambers Brothers, The Byrds, Jefferson Airplane, Iron Butterfly, etc. However, the real highlight for me would have been the point in the Airplane’s set, where David Crosby instigated a massive pie fight with the band, which the audience stormed the stage to take part in, as well.

Silent footage of the Dead and the Airplane from the ’68 fest set to music from the Dead’s set (with a little bit of the pie fight!)

Jimi Hendrix’s set from the ’69 fest:

50,000 people congregated upon the Denver Mile High Stadium to see the likes of Tim Buckley, Creedence Clearwater Revival and Three Dog Night. The festival is known for a gatecrasher riot that took place outside of the stadium. These clashes were out of a demand for the festivals to be free and they lead to the fences getting torn down. This was a regular occurrence at the time, but more so after Woodstock’s infamous decision to go free (as captured in the Festival Express and Isle of Wight Festival documentaries) but what’s different here is that when the police fired tear gas into the aggressive crowds outside the stadium, clouds of the stuff drifted over into the festival grounds. Luckily, the previously destroyed fence allowed for the festivalgoers to flee the gas without getting crushed. After all of this, on the last day of the event, the promoter declared free entry.

Online, you can hear recordings of sets by Big Mama Thornton:

Put together by underground mastermind and The Deviants’ front man, Mick Farren, Phun City was a truly experimental event, with no admission fees and fences. The Pink Fairies performed (and stripped naked at the close of their set) along with: Mighty Baby, Demon Fuzz, The Edgar Broughton Band (with Kevin Ayers), William S. Burroughs and the MC5. It has been claimed that the festival was mostly filmed and recorded but nothing seems to have survived except for a bootleg record of the MC5’s set. 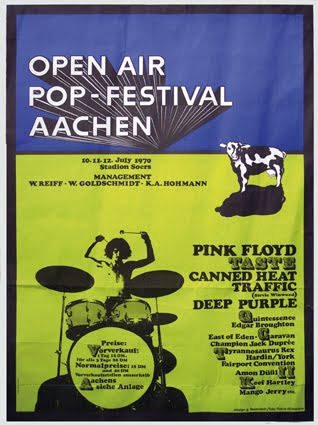 Put together by three local students of Aachen, Germany, the AOAPF featured my favorite line up of any festival. Psychedelic, prog and hard rock groups like Pink Floyd, T. Rex and Deep Purple shared the stage with Krautrock legends like Kraftwerk, Can and Amon Düül II. Other mythical names in psych and prog rock that made an appearance include; Caravan, Kevin Ayers and the Whole World, Raw Material, Golden Earring, If, Free, Taste, Keef Hartley, Edgar Broughton band and Mungo Jerry. I’m very saddened by the fact that despite this ultimate dream-like lineup, very little seems to have been recorded. There are a few bootlegs out there, including performances by Pink Floyd, Free and Deep Purple, but if I could have a massive, complete soundboard quality box set of any festival, it would definitely be this one.

and a very short clip of Kraftwerk’s performance:

This one is completely new to me. Originally set up to be an 8-day event in McCrea, Louisiana, the optimistically titled “Celebration of Life Festival” was another event like Powder Ridge that seemed doomed from the start. Everything from hostile law enforcement to oppressive heat and even on-site deaths by drowning made many acts cancel and eventually lead to the festival ending prematurely. The drama has been recently immortalized in a documentary short, called McCrea 1971. According to the film’s website, nobody’s totally sure exactly who ended up playing. Out of the originally announced lineup, some of the few artists that have been confirmed include: Stephen Stills, Chuck Berry and Ike & Tina Turner.

Here’s a trailer for the documentary: 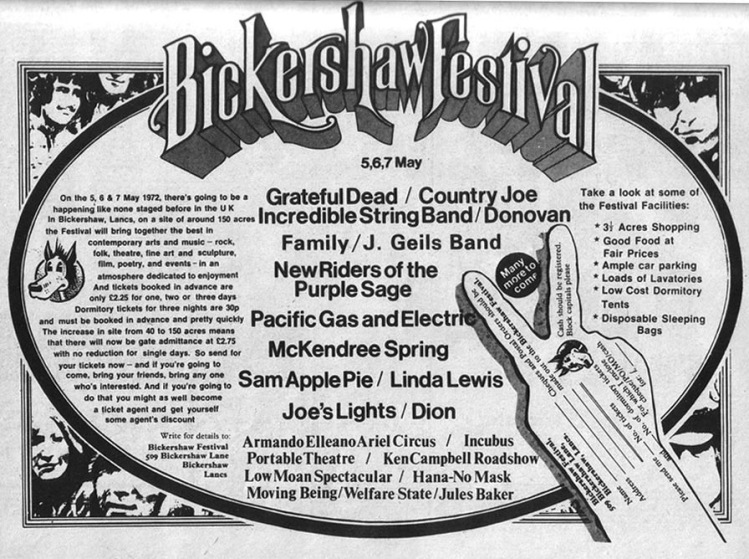 Held in Wigan, Lancashire, England in early May of 1972, Bickershaw hosted the likes of: The Incredible String Band, Donovan, The Kinks, Hawkwind and Dr. John. This was also a stop along the mythic Europe ’72 tour for the Grateful Dead and they were one of the biggest draws that weekend. Young Joe Strummer and Elvis Costello attended the concert and both found it to be hugely influential to their respective careers.

Luckily, the entire Grateful Dead performance (as well as the rest of the ’72 European tour) has been released officially. Check out the 30-minute version of “The Other One:”

So that about does it! I thank you all for following along and reading this series of posts all throughout the summer. It was something that I’ve wanted to do for years and I was glad to see that other people found this topic to be as interesting as I do.

If you could take away just two things from my Festival Fridays posts, I’d hope that they would be:

1) Like Eric Burdon sang in “Monterey,” don’t let music pass you by, because some events are experiences and just can’t be replicated through photos or documentaries (or properly recorded, for that matter). If a festival or any other concert is coming up and you really want to go but you’re not sure if you should, just do it.

2) If you plan on hosting an event where there will be a good deal of people, hot weather and drugs, you should plan it far away from bodies of water that are large enough to have currents and tides.