Buffalo, New York. Tarnished. Wounded. Abandoned. As my younger brother and I rolled into town, the streets were completely deserted save for a few plastic bags blowing in the wind like manufactured tumbleweed. The sky was dark with storm clouds, and the vast buildings that surrounded us were covered in soot and other signs of neglect, which made them appear like permanent shadows. Tom Verlaine’s cover of Dylan’s “Cold Irons Bound”, from the I’m Not There soundtrack came on the mix CD that my brother made for the trip. The sinister, foreboding moodiness of the guitar, the slow pulsing beat and Verlaine’s dried up husk of a vocal performance seemed to be perfectly suited for our decomposing surroundings. The track was even in beat to our slow crawl past abandoned churches and burned out homes. The effect was eerie, and the hair on our necks only raised even more.

After struggling to find a parking lot, we finally had our first sightings of living human beings, and they sure weren’t very friendly. Glaring, knowing glances that said to us, “I know you aren’t from around here” passed around as we walked to the venue. Fearing for your lives is a perfect feeling to go into a Black Angels concert.

Waiting around the bar/lounge area, perusing the merch tables, we were surrounded by the record store crowd; a mix of young guys in black t-shirts and glasses, middle-aged dudes with short hair and large button ups and the occasional serious looking girl with thick hair and various facial piercings. Sitting at tables near by, with stacks of drinks in front of them, were people who seemed completely out of place but content anyway: beefy-necked, spiky-gelled-blond-highlighted-hair adorned bros in their early twenties dressed in Hollister and American Eagle’s latest summer wear chatting up girls who looked to have been once cheerleaders in high school and nothing much since as well as the occasional beer swigging, graying polo-wearing nearly obese golfers. They all seemed to be more interested in the price of a Bud than whoever was playing there that night.

Upon entering the actual performance area, Pink Floyd’s Echoes cooed at us through the house system, before melding into 13th Floor Elevator tunes. The room was filling in slowly, so we managed to get to the front of the stage fairly easily. Being cloaked in darkness, waiting for the bands began to take on joyous, nearly claustrophobic anxiety. Everyone seemed to have a smile on their face while their eyes darted around nervously in various directions. Being aware of Night Beats but never actually hearing them before completely left me unprepared for what happened next.
Night Beats took the stage with very little flare. At first. They simply strolled out and put on their instruments, made a quick countdown and each member of the trio blasted our bones with scorching intensity all at the exact same moment (I would not be surprised if The Night Beats have perfected telepathy). The sheer volume that the band produced was immense. This cacophonic style married to what sounded like The 13th Floor Elevators on the most potent speed available, produced an effect that was equally mesmerizing as it was infectiously danceable. The guys were there to play, not to fuck around, so they attacked us with detonation after detonation without much pausing in between. The pure energy that emanated from this group and their performance burned with a bright white sheering glow. Shrieking feedback, catastrophic bass and manically concentrated drumming all coalesced into a single sound and shot straight into our skulls. Once it penetrated our craniums, the compressed asteroid of sound grew and swelled into a full encompassing fever that throbbed and pulsated around our brain cavities to the beat of the band’s rhythm. From start to finish, Night Beats rocked without any distance from the raw and bloody and singlehandedly proved themselves to be one of the most exciting and impressive acts alive (or undead).

After The Night Beats unceremoniously wafted away from the stage, we were plunged into the steamy darkness again. The room began to fill with a heavy populace that made the already hot room uncomfortably sweltering. People pressed in from every side, clouds of smoke arose from every direction and certain audience member’s tabs seemed to be finally kicking in. Roky Erickson blasted through the PA and kept the fierce acidic mood running from the previous band. The people around me all seemed excited, distracted, and filled with the same anxiousness they had at the start of the show. Once The Black Angels took the stage, however, everyone’s attention glued straight to the group.

The audience suddenly became a mix of people who either exploded with excitement or became dribbled piles of human jelly with stoned contentment. Within moments the group slipped easily into a floor stomping number that sucked the energy from the atmosphere of the venue and transformed it into a communicable vigor that infected most of the audience within seconds. The psychedelic lightshow and film loops that projected behind the group the entire time were absolutely phenomenal and only added to the already impressive hypnotic lysergic quality of the music (especially when they projected a loop of a gothic rocker chick dancing topless underneath an unzipped leather jacket).

Every single song was top notch in terms of performance and effort. From genuine classics such as “Young Men Dead” and “Sniper at The Gates of Heaven” to the most recent material available, including “Indigo Meadow” from their upcoming album, The Black Angels kicked through every number with intense fervor and expertise. What amazed me was how nearly all of the members of the group interchanged their instruments through out the set. One minute a member could be playing electric guitar, then the next minute they could be popping away at a bass, and then after that they could be sending out chilling waves through a menacingly icy organ.

Each member of the band exuded cool. Bathed in swirling psychedelic colors while beating away at their instruments with suave professionalism, The Black Angels appeared like The Velvet Underground if they had crashed an Os Mutantes gig. Possibly the best example of this coolness was drummer, Stephanie Bailey, who thumped away at her kit without looking like she couldn’t give a single shit about anything but producing a frenzied, primal rhythm.

After an utterly mind-melting version of “Bad Vibrations”, the group abandoned the stage and singer/sometimes bass player/sometimes organ player reappeared with a guitar and played a gorgeously saccharine version of the recent Record Store Day b-side, “I’d Rather Be Lonely”. After this, the band returned and played new rocker, “Indigo Meadow” and followed that up with a final sonic assault, the chillingly tense, “You on The Run”. The song finished with an extended, blissful sitar jam by the band’s own master of the instrument, Rishi Dhir. His skillful playing saturated us all like a closing blessing. The audience all were dead silent, as if everyone held their breath until Dhir eventually rang out one ultimate note, put down his sitar, stood up, and pressed his hands together in thanks and left the stage. The audience went nuts and still begged for more. Yet the last of the kaleidoscopic Technicolor light show dimmed out and the house lights flooded the venue and everyone turned to leave.

Walking back to my car through the dark streets of Buffalo, bunches of drunken down-and-outs howled their ballads of choice from lightless alleyways and finely dressed socialites sprinted in and out of clubs that had names like condom brands, all unaware of the highly explosive and darkly beautiful energy their city harbored only moments before. My eyes felt like tearing up, my ears rang like they would never stop, the excitement kept all of my muscles jittery and twitching. I felt like I really experienced something truly special. Like as if I had finally seen the truth in something. I felt like something fundamentally has changed in me forever, and for the best. I thanked god, the devil, the stars, and any other being responsible for this great night that I surely would never forget.

As I drove down an exit ramp, and the cluster of smoky city lights began to shrink in my rear view mirror, I began to hope that somewhere lodged deep within the most depressed of corners of that town, those sound waves that brightened my soul earlier that night still and always will exist somewhere, forever enlightening someone else who desperately needs it. 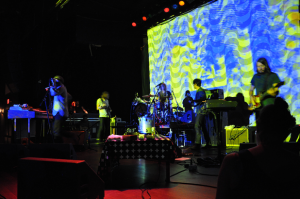 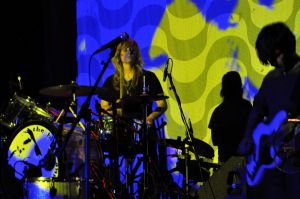