“Music has always been a matter of Energy to me, a question of Fuel. Sentimental people call it Inspiration, but what they really mean is Fuel. I have always needed Fuel. I am a serious consumer. On some nights I still believe that a car with the gas needle on empty can run about fifty more miles if you have the right music very loud on the radio.” 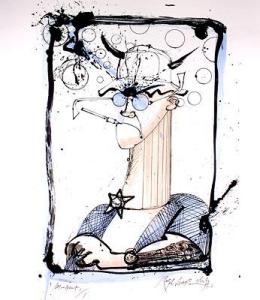 Today marks the 10th anniversary of the suicide of Hunter S. Thompson. As you may know, Thompson was one of the loudest, controversial and most unique voices in American literature during the last half of the twentieth century. Not really needing much of an intro, Thompson is and has always been an enigma. A larger than life character that has given great influence to nearly all forms of art and media. If you haven’t already, you could really do no wrong by reading at least Fear and Loathing in Las Vegas, Hells Angels and Fear and Loathing on The Campaign Trail 1972.

Outside and alongside Thompson’s love of drugs and all things exhilarating, the Good Doctor also had one hell of an appreciation of music. Even the rhythm of his prose could at times be similar to a song by Dylan, Beefheart or The Dead. So being the day that it is, I thought it would do a world of good to talk a bit about Thompson’s relationship with music.

I think it would be interesting to start with Thompson’s list of his top 10 favorite records of all time (as of 1970) which was found in a letter that he sent to John Lombardi, the then editor of Rolling Stone, which has been circulating online for a while now:

The selections of Dylan isn’t super surprising, as Thompson had always referred to him as a personal hero. Supposedly, he had even said at one point that he had “been arguing for years now that music is the New Literature, that Dylan is the 1960s’ answer to Hemingway.” Through many of his works, Thompson often quoted or referred to Dylan and his songs, especially in Las Vegas. Mr. Tambourine Man was possibly his absolute favorite song. He even requested for it to be played at his funeral (as his ashes were shot into the atmosphere by a giant cannon).

Being a rock star of writing, Thompson was the friend of and frequently visited by various generations of musicians, here he is hanging with Warren Zevon

He also loved the Grateful Dead

Neil Young composed the original music and performed “Home on The Range” for Where The Buffalo Roam, the first of three (so far) films based on Thompson and his work (he also appeared briefly as an extra).

Thompson and his frequent collaborator/illustrator, Ralph Steadman even released a track on their own

While doing research about this topic, I came across this great piece by David S. Wills. So for further reading, definitely check his take on Thompson and music http://www.beatdom.com/?p=786

“Maybe there is no Heaven. Or maybe this is all pure gibberish—a product of the demented imagination of a lazy drunken hillbilly with a heart full of hate who has found a way to live out where the real winds blow—to sleep late, have fun, get wild, drink whisky, and drive fast on empty streets with nothing in mind except falling in love and not getting arrested . . . Res ipsa loquitur. Let the good times roll.” ~ Hunter S. Thompson, Generation of Swine: Tales of Shame and Degradation in the ’80′s.