After one of the busiest Decembers in recent memory, all of us here at Record Crates United are getting cozy at home, putting on our beloved Christmas records (A New Possibility by John Fahey, at the current time of writing) and reflecting on another year of great music. So now would be an excellent time to check in on some new and old RCU favorites… 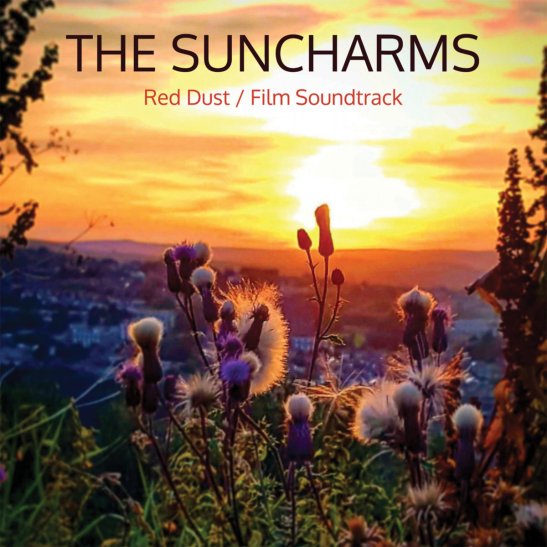 This Sheffield indiepop group burst out in the scene with a shockingly strong and successful EP back in ’91, which lead to a healthy cult following. After this followed a few other EPs and a Peel session, but then the group inevitably split and scattered long before the close of the decade.

Thankfully, a renewed interest in the band grew out of the release of a retrospective comp of the group’s entire body of work. So now the group has returned to the studio and dropped this blistering single.

Amazingly, the band sounds as fresh and vigorous as ever, making one easily believe that they’re a completely new outfit.

“Red Dust” is a dreamy bit of psychedelic-tinted shoegaze that feels as hazily tranquil as the single’s picture sleeve. The sound here is quite reminiscent of lo-fi pop gurus like The Gifted Children and Eric’s Trip as well as surreal ‘90s acid post punk explorers like The Telescopes and The Television Personalities. However, The Suncharms give this style their own unique spin, making it sound purely their own.

The B-side, “Film Soundtrack,” is a buzzier track with crunchy guitar and irresistibly catchy pop hooks that never get old. In some ways, it sounds like as if Sebadoh and The Bevis Frond collaborated with Matt Hollywood of The Brian Jonestown Massacre (which is a hellishly good thing). The freshness of this track would trick any listener into believing that this is a brand new band, instead of one that has its roots as early as 1989.

These are two songs that I’d honestly recommend to everybody that I know, as they have a quality that could work with just about anyone, regardless of their typical taste in music. Buy their seven inch here.

The Prefab Messiahs – “Bring On The Robots”

2018 has been a big year for The Prefab Messiahs, especially due to the release of Psychsploitation Today and its accompanying video album, so it’s only fitting that we can’t enter 2019 without one last new song by the band.

“Bring On The Robots” and its video perfectly capture the current existential disorientation and dread that may make many of us want to give up on all of humanity and allow the robots to finally take over. Who would’ve thought that some of the most listenable socially conscious music of 2018 would take the form of psychedelic pop?

Erika Lundahl with Issac Castillo – Right Back at You

Erika Lundahl has made a career out of creating hard-hitting, deeply passionate songs about sociopolitical issues that face our nation, but the live-in-studio Right Back at You might be the artist’s most honest and personal outing to date.

Lyrically, every song here just cuts straight to the bone. At times, Lundahl’s words conjure the prodigious religious imagery of Judee Sill’s songwriting and at other times, the cathartic romanticism of poets like Edna St. Vincent Millay.

From celebrations and odes to activism and the environment, like “Jack Be Nimble” and “Coaltown,” to achingly introspective meditations on love and artistry, like “Bartered Time,” this is a record filled with moments of raw compassion and truth.

The stripped down and intimate approach to this recording allows for her voice to take center stage, showing that she is at an absolute peak of her talent. On every track, Lundahl’s vocals are charged with so much power and emotion, it’s impossible not to be moved by them. Sounding somewhere between mid-70s Joni Mitchell and Tracy Chapman, Lundahl’s singing voice makes each word in every single song count.

If you get a chance to see Erika Lundahl perform, you will surely be treated to a truly special experience. This album is evidence enough of that.

Track Not Found – “Run Me Down”

Guernsey’s best punk rockers, Track Not Found, have just been signed with Funnel Music, so thankfully we’ll be likely hearing some new material in 2019.

To celebrate the great news, the band has released a new live video of “Run Me Down,” which just rips.

In sadder news, earlier this month, The Frecks, one of RCU’s favorite artists of the year, announced that they are officially disbanding.

As Erica, the former bassist of the band, posted the following on their Facebook page:

“Due to growing up and learning how to be adults, we decided that the frecks were no longer fitting all our creative energies. We all found ourselves busy with school, work, and just growing as people. Because of this, we will no longer be playing shows or making new music. However, we do have an ep that we’ll release digitally for all of you sometime this month. We’re still going to make music, as Izzy is in @stripes520 (Instagram) and Juliet and I are in @alienjacketband(Instagram).Thank you everyone who supported us, booked us, and allowed us to become a part of your life. We love you. This isn’t goodbye, but rather a new beginning.❤”

While this is indeed quite a bummer, we here are excited to hear this upcoming EP and to see where else these folks go with their musical ideas and ambitions.

Finally, with it being Christmas Eve and all, you’re probably well into the holiday spirit by now, BUT also probably sick of the usual yuletide music. So if you’re in need for something a tad bit different (and have already blown through this year’s RCU Xmas mix a few times) then might I suggest 2014’s holiday comp from our buddies over at King Pizza Records. With class acts like The Rizzos, Half Moon and Heavy Flow providing the garage rock equivalent to spiked eggnog, how can you go wrong?