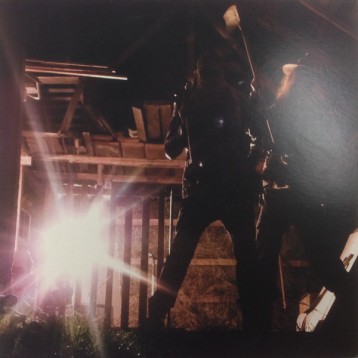 Thankfully, we live in an age where the psychedelic/progg bands of Sweden are finally being recognized to some extent here in the West. Groups like Träd Gräs och Stenar and their other related monikers, like International Harvester, are starting to develop a similar cult following that Kosmische groups like Can and Amon Duul II have had for decades. With this being the case, it is my most sincere hope that some of the more modern Swedish acid rock groups, like The Spacious Mind, will start to gain a wider recognition here in the States. Even the various side projects of the group, such as PSP, headed by the Minds’ Jens Unosson and Niklas Viklund, are total gems and deserve a tsunami of praise.

The record throbs with a dark, murky psychedelia, sounding at times like a cross between Brainticket and Goblin. For example, a sharp hypnotic beat coupled with eerie chant-like vocals that repeatedly declare “Wicked!” together make the opening track sound like a lost Suspiria cue.

A major strength to this record is that every song has its own distinct, unique sound and flavor. They are each so different from each other, the album nearly sounds like a compilation of five separate bands. For instance, on the second track, “Takin To The Heather Blues,’” Hendrixian wah-wah guitars chop at mountains of nightmarish keyboards before giving way to a full-on acid-rock assault, while the deceptively titled “So You Want to be a Rock n’ Roll Star” (it’s not the Byrds song) features trembling synths that ring out dense, cosmic soundscapes. Elsewhere on the record, the sound ranges from stoned campfire folk-blues to transcendental, primitive electro dance beats. How many albums can you say that about?

However, no matter what style Jens and Niklas dabble in, there’s always an aura of the cosmic. Even during the album’s more acoustic and natural moments, like “Woke Up in a Ditch n’ This is What I Had,” there’s still an underlining hazy, astral vibe. In this way, the sound here often conjures up the likes of Gong and Ash Ra Temple, who always had an air of the cosmos about them, no matter what kind of instrument they found themselves behind.

If you’re a fan of Krautrock and/or the work of The Spacious Mind and you haven’t heard PSP’s Cowboy Cathedral LP, then you are seriously missing out on something special.