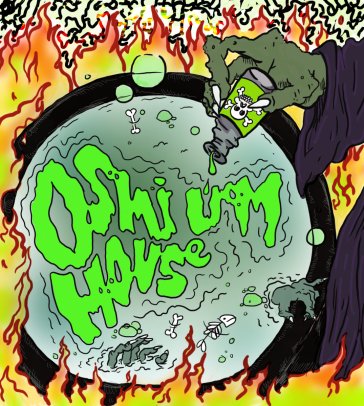 While many bands today might play psychedelic music, others, such as Denver’s Osmium House, understand that it is not merely a genre. They know that psychedelia is a state of being, a way of thinking and a philosophy that can be applied to one’s art.

No matter what exact style of music Aesop Adams’ project takes the helm of, it’s always approached with an expansive, mind-altering methodology and consciousness. This alone makes every song of his truly psychedelic, in both an aesthetic and a psychological sense.

At the start of this year, Adams completely flayed minds apart with his Omnia release (which yours truly has been obsessed with), which was followed up by a scorching live collection in June, but Entrance Level, his latest (and first full-length), is another trip entirely.

This is a record that shows just how versatile and free-flowing Adams and his band can be. From slow, eerie kosmische dirges that tremble with disturbed synthesizers (“Der Sensenmann”), to ritualistic acid folk wanderings (“Ronwe”) to examples of the band’s apocalyptically rockin’ live sound (“Head To The Sun Singer”); Osmium House’s massive range is on full display here.

For a band that is as new as this, it’s amazing to hear Adams’ crew conjure the spirits of lysergic gods and explorers like Acid Mothers Temple, Bardo Pond and Hawkwind, while still maintaining an original sound that is truly their own. Most groups take several years and multiple tours and releases to develop these kinds of skills. The possibilities for Osmium House’s future are excitingly endless. It’s going to be an utter joy to see where they go from here.

If you enjoy music that is psychedelic down to its very DNA and will simultaneously entrance you and knock your brain right of your skull, then do yourself a favor and grab Entrance Level here.