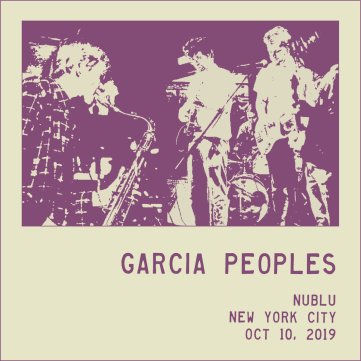 While Garcia Peoples’ studio work has been nothing short of revelatory, it’s their reputation as a live act that may be the biggest factor behind their quickly growing fanbase. No matter the setting, they never cease to melt faces and blow minds with their boundless riffage and sharp improvisational skills. The evening of October 10th, 2019, captured here by the excellent Eric Pier-Hocking of NYCTaper, at Nublu 151 in New York City, is an excellent example of this.

This night was one of the early gigs in a month-long residency at the Manhattan venue, and it was planned to be an album release party for their third record, the game-changing One Step Behind. While the title track had been played live before as it was being developed, this would be the first time that the band brought the entire multi-movement suite out of the woodshed. At the time of writing, it is also still the only time that the band has performed the piece with guitarist Tom Malach’s father, Bob Malach, on sax, reprising his role from the album. With these particular stars aligned, there was no chance in hell that this was going to be an ordinary night of music…

“One Step Behind” is easily the band’s “Bitches Brew,” in terms of its ability to evolve and change from performance to performance. On some nights, the band explores deeply within multiple movements of the song, experimenting with how far each one could be stretched out within the confines of the suite’s framework. Conversely, some outings of the track are relatively short and speedy. On some occasions, sections of it even appear sandwiched between other songs, but on others—like on this particular October evening—the full epic unfolds on stage, surpassing even the studio version’s impressive run time.

On this tape, you can hear the tune’s extended intro being pushed into the furthest reaches of the spiritual jazz cosmos—even drifting into phases of unexpected quiet, which allows for Garcia Peoples’ mastery of atmosphere and subtlety to shine through. This helps to give the “take-off” moment at the start of the next movement an even more stunning kick (which occurs around the twenty-minute mark here).

There are so many aspects of this performance that make it total fire. One is whenever the rhythm section, aided by the elder Malach’s sax, tests the boundaries of the versatility of the suite’s main riff. They sometimes let it swing with a funky strut, like something off of a nasty James Brown 45, and other times, they take the song into fierce free-jazz territories.

Other highlights include the vocal harmonies, which are very much on point, and the jamming that erupts after the final chorus, which finds the band chugging along while Tom’s father takes flight in full melodic-skronk mode. The energy that he has here seems to ignite the rest of the band, who completely fire on all cylinders during the concluding section. This scorching energy carries over into the final song of the evening, a totally ripping “Show Your Troubles Out.”

This may be one of the most rabid performances of this Cosmic Cash-era track that’s been recorded thus far. The fried guitar interplay is something to behold here. Tom and Danny (Arakaki) strike through the track like twin bolts of lightning, conducting and intertwining around each other, while obliterating everything in their path.

If anything, this tape is reason enough that if Garcia Peoples come to your town, you better make it out to their gig. Even if you’ve already seen them. You’re guaranteed to be treated to a one-of-a-kind experience.