Six Organs of Admittance
Somewhere Between Her Shoulder and God 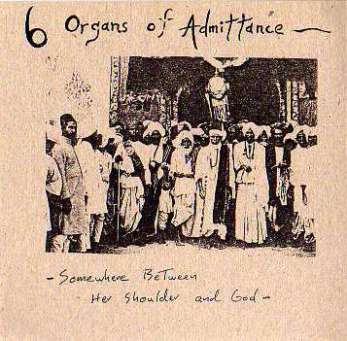 Trying to describe Six Organs of Admittance, or its founding member, Ben Chasny, is like trying to pinpoint what exact color the film of an oil slick is. A look into Chasny’s extensive discography reveals a vast array of styles and approach that all blend together and bleed out in various directions. One thing can be said for certain though, and that is that Chasny’s music all sounds to be meditated, very carefully played and dear to him and his collaborators. Like any good jazz artist, when Chasny’s music features improvisations, they sound too meticulous to be off the cuff and his pre-written material comes off as too free and wild to be written.

Chasny’s work in and out of Six Organs has danced within each polar end of the musical spectrum that he dwells in, from the howling electric maelstrom that is Rangda to the acoustic, trembling whisper of “Goodnight” from 2007’s Shelter From The Ash.  This release exists in Chasny’s acoustic realm, albeit in a shadowy crevice of it.

The A-side kicks off with some low, guttural acoustic guitar that shudders out the track’s rhythm, giving way to Chasny’s nearly chant-like vocals. The percussion that pops up next in the mix sounds so incredibly archaic and primordial that you’d swear that they were lifted from a Folkways Native American archival LP. These combined elements give the song a nearly spiritual, ritualistic like quality that mystifies the listener enough to follow the slippery guitar solos that weave through the song with perfect ease. An overall beautiful track that still has an air of darkness to it, like some sort of druidic blood ceremony around a fire under the moonlight.

Side-B starts with the haunting “Sum of All Heaven”, a cold and stunning track that grips the listener with a unyielding clasp until Chasny’s hands audibly leave the guitar strings for good.  The guitar work alone is notable here, as it almost sounds to be more like a percussion instrument than anything else. This effect is only enhanced further by the achingly dramatic use of (what might be) natural reverb.  In fact the reverb on the track sounds as if Chasny’s alone in a large open room, or perhaps in a damp cave, making his voice swell in strength and melancholia. This song might be best listened to alone and definitely with the lights out and windows open.

Changing gears completely, next Chasny steers off towards some foreign sun and finishes the seven-inch with a subtly sunny, all-acoustic cover of The Rolling Stones’ “Dead Flowers”.  It’s not terribly often that one hears Chasny do a cover, specifically one by a group as pert as The Stones, yet he pulls it off quite well. By some truly astonishing finger picking (that somehow tends to sound like an up-right piano at times) and Chasny’s luminous vocals, the Six Organs front man truly makes the Sticky Fingers track his own.

An early release for Six Organs of Admittance (and one being in between some truly heavy LPs) and clocking in at just barely 12 minutes, it’s easy to see why Somewhere Between Her Shoulder and God can unfortunately be overlooked. However, if played, this seven-inch can give the listener three incredible, highly unique performances from an immensely faceted, extraordinarily gifted musician. Despite how eclectic this disk is, the listener might find that it is incredibly addictive, and as Ken Hensley said, “it is hard to understand the addiction unless you have experienced it.”