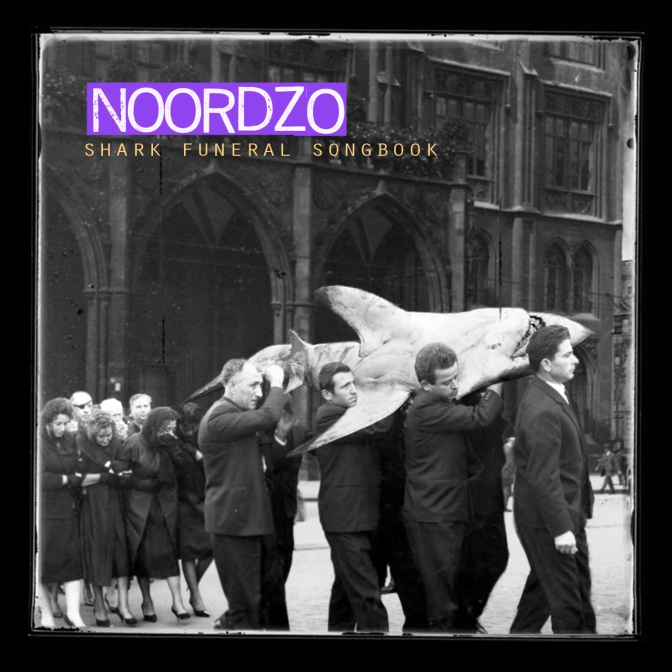 What a wild creature, this album is.

Mike Noordzy, the New Jersey-based sonic sorcerer behind Noordzo, has quite a few albums and musical projects under his belt, but this, his latest offering, may be his most striking record yet.

The entire album has a thick, enigmatic feel to it. The record, which is built out of cinematic, dark ambient-jazz instrumentals, takes you to a deeply detailed, seedy underworld of shadows and malformed cityscapes. From start to finish, wobbly, strangled saxophones dance like licking flames while needle-like reverbed-guitar intersects with clanging, clashing percussion and noir atmospherics.

Noordzy describes Shark Funeral Songbook as a soundtrack for a non-existing movie and with one listen, you can really understand what he means. Every track on the record is so evocative and carries so much tone and mood that it conjures up scenes from gritty surrealist detective films or dark, nightmarish fantasy flicks like The City of Lost Children or Santa Sangre.

While the strength of the album lies in listening to it as a whole piece in one sitting, if there was ever a need for a separate single, I would strongly nominate the track “Tituba’s Garden Party.” This track, assumed to be inspired by the South American slave that was the first accused in the Salem Witch Trials, has an ominously slow marching rhythm, provided by what almost sounds like someone bashing metal trashcans with baseball bats (the best kind of percussion, if you ask me!). This thudding, hypnotic beat lays the bedrock for a wall of droning, distorted guitar and shrieking, venomous sax to lash out and grow in intensity. The entire track stomps forward, increasing in volume and ferocity until it slowly fades into a melting, puddle of electronic noise (which segues perfectly into the next track). A total scorcher of a track, one could easily imagine a dance with the devil around a massive bon fire would sync perfectly well with this song.

Somewhere between the wicked mischievousness of 2000s-era Tom Waits and the darker corners of John Zorn’s noise-jazz discography, Noordzy and his group have created a deep and vivid world within his music that will haunt and entice listeners for many, many years to come.