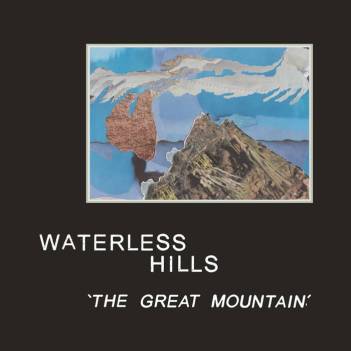 If you need to escape the realities of the modern world, then let the mystifying improvisations of Waterless Hills sweep you off to some lost distant landscape in an undetermined century.

The band, which (on this release), is comprised of Andrew Cheetham on drums, C. Joynes on guitar, DBH on violin and Gavin Clarke on bass, produces haunting instrumental soundscapes that are heavily influenced by ethereal Krautrock and Central European and Middle Eastern folk sounds and traditions.

On tracks like “They Squatted By The Tank In The Light Of A Lantern,” Joynes’ guitar cuts tight repetitive curlicues like an electric oud, as DBH pulls the band into a tense atmosphere of intrigue and suspicion with his smoky violin work.

As the press release states, the jams here are loosely based on Freya Stark’s 1935 travelogue ‘The Valleys Of The Assassins.’ That aspect certainly comes across extremely well on the album, as they indeed play as if they were soundtracking a film adaptation of the book. Each track bears a vast cinematic scope, while the rhythms and moods seem to suggest a trek through barren and hostile terrains by train or even horseback. It doesn’t take a ton of imagination to picture some songs, like the mysterious “An Untidy Country Of Glaring Limestone,” serving as the musical backing of some cryptic, silent Valentino movie.

By now, you should know to always trust any release from Cardinal Fuzz and Feeding Tube Records, but in case you need any extra nudging, this is an album that fans of The Myrrors, Popol Vuh and Kronos Quartet would instantly adore.

You can grab this album for your next journey here (or here, if you’re in the UK).