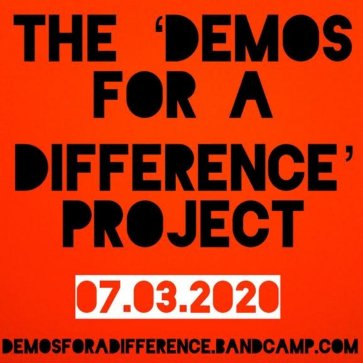 The Demos For a Difference Project is a new benefit album created by Brian Erickson, of Asbury Park, NJ, that is completely crowdsourcing its music (with over 100 different artists at the time of writing), all in the name of raising funds for the NAACP Legal Defense Fund.

In addition to creating the album and fundraising, the project’s mission statement also includes using social media “to promote and amplify black and brown artists, activists, and community leaders.” Ultimately, the project will “aim to forge a deeper connection between art and activism, to give artists another avenue of supporting the Black Lives Matter [movement] even if they don’t have the funds to do so, and to create a stage on which voices from POC can take the center.”

Erickson and Hana Denson, a fellow musician friend and the social media manager for the project, said that the inspiration to create this album at this specific point in time was “the desire to do better and be more helpful.”

“As people who are involved in a local music and arts community, this felt like a good way to use that platform in a positive manner,” the said.

Being a part of the tight-knit New Jersey music community, Erickson and Denson felt they were in a unique position to get such a large undertaking off the ground. “Without the community, this project wouldn’t exist at all,” they said. “It was a good jumping off point; we knew a lot of artists of different kinds and were able to get word out fairly quickly.”

They also added that they had sought the advice from many other artists from the New Jersey music scene for recommendations on which charity to donate to. The NAACP Legal Defense Fund was the top choice amongst those they asked.

Any artist from around the world can contribute to the album, which will be released onto Bandcamp on July 3rd, and all genres, styles and stages of production are welcomed (even though demos are just what’s being asked). In fact, the only restriction that Erickson has placed on submissions is that there can only be one recording per artist.

Once the Demos For a Difference Project album is released, Erickson and Denson hope that it and its continued promotion will help foster a deeper connection between art and activism in two particular ways.

“One is by using art to raise money for activists,” Denson and Erickson said. “The tangible work that the NAACP LDF has been doing for almost a century is extremely important, but can sometimes fly under the radar. As artists, we are in a position to shine some light on people who don’t necessarily get that attention.

“The second goal of this project is to listen to black voices and amplify them. Whether they be artists, politicians, or change-makers, we want to help them be heard. Right now, the focus is on putting the album together and then promoting it for some time to raise significant funds for an important cause. After that, we will have to listen to figure out what the movement demands.”

If you want to donate one of your own recordings to Demos for a Difference, and help support a very worthy cause, you can contact the project on Facebook, Facebook Messenger, @demoforadifference on Instagram and you can email them at demosforadifference@gmail.com.

Lastly, please be sure to check back on the album’s Bandcamp page on July 3rd so you can purchase this album yourself.