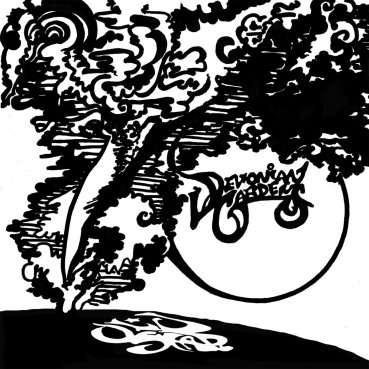 Devonian Gardens’ new seven-inch single, “Old Star”/”Light Years,” might be their first new release in seven years, but it was certainly worth the wait.

The Calgary group was once known as Deadhorse and released a slamming record of acid-tinged garage rock in 2011. By 2013, the band changed their name to their current (extremely fitting) moniker, Devonian Gardens and unleashed an excitingly unique and extremely hallucinatory album on Beyond Beyond is Beyond Records. All was quiet until May of this year, when this dreamy 45 appeared.

On side-A, “Old Star” broods with a tense, yet gorgeous stoicism. Haunting vocals drift upwards like smoke, as primal drums lead a storm of acid-fueled guitars and warped keyboards. From the gnarled drones to the British folk-inspired fingerpicking, the song easily fits in somewhere half-way between the works of Trees and Espers.

The flip-side, “Light Years,” is decidedly more apocalyptic. Beginning with a backing of surreal electric harp and chilly ethereal singing, the song soon shifts gears into a shadowy march. Bludgeoning percussion, menacing chants and siren-like wails make the song feel like both a fierce outcry as well as a warning of impending doom. Seeing that this track originally appeared on a 2016 benefit album for the ACLU and the Sierra Club to aid in their battles with Trump, it’s easy to understand why it sounds the way it does.

Both these songs stretch beyond any one genre, blending together elements of acid rock, English folk and 60’s experimentalism (think White Noise and The United States of America). They feature strong ritualistic vibes and a dreamlike quality that easily becomes more nightmarish as each track progresses. Yet both sides make for a beautiful and downright unforgettable listen.

You can get yourself this 45 right here today.