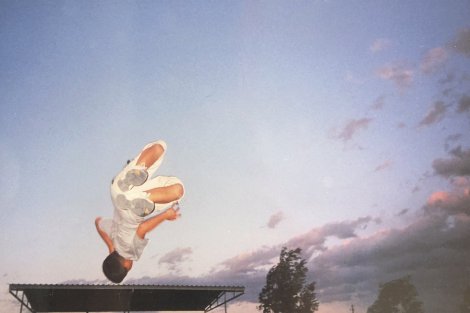 Freshly released by Aural Canyon, this record is packed with lonesome lo-fi guitar and ghostly piano meandering through the mists of droning synths. These subdued compositions easily suggest faded memories and still moments in time.

The title track is perhaps the most evocative piece on the album, as it drifts with layers of echoing guitar that appears to be slowed down and warped, as if the recording has been distorted with age. The tone is warm and positive, even when fuzz solos emerge around the half-way point. The song aches with an affectionate yearning for a period during the artist’s childhood, around the time of his school’s book fair.

Apart from the name of the song, evidence for this lies in a poem in the album’s liner notes:

stumbling and haunted
by memories of a childhood ditch

the bookfair was near

didn’t know you would be missed
in this way

Recollections of—and a desire to return to—simpler, happier times, perhaps with people who are no longer in Tino’s life, certainly appears to be the overall theme of the record. “The Dust Was Floating in The Light” indeed captures the feeling of when you’re a kid with nothing to do on a quiet afternoon but lay in your room and stare at the slowly drifting specs of dust highlighted by shafts of sunlight. Meanwhile, songs like “Schoolnite” are imbued with the sleepy minutia of evenings filled with routine activities like homework, piano lessons, etc.

If you ever wanted to hear what being nostalgic for your childhood sounds like, listen to this beautiful album. The feeling will linger with you for a long time.

Be sure to grab a physical copy on tape from Aural Canyon today, as they are down to under 10 copies at the time of writing.