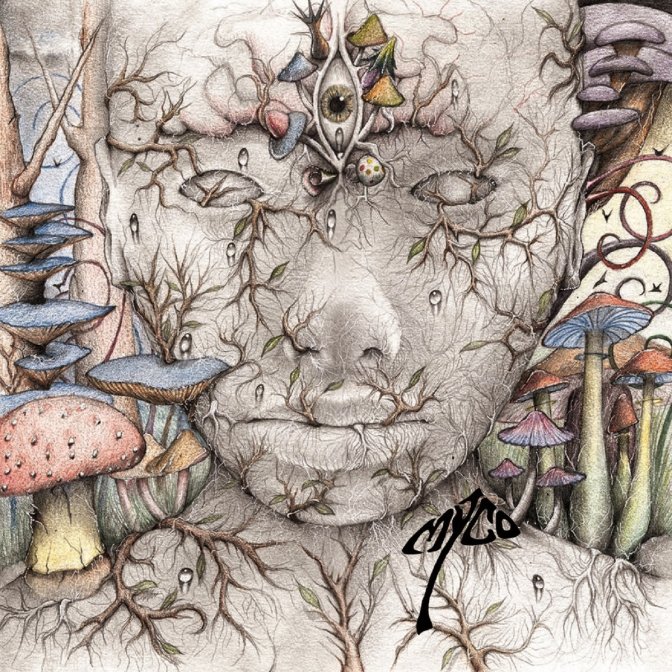 All throughout Myco, the Kansas City band gathers a rich assortment of influences and distills them all into a hypnotic and otherworldly soundscape. From the swampy reggae-like rhythm of “Shower,” to the very Tears for Fears-on-acid-like vibe on the excellent “Myceliated,” this EP is like a sound collage of styles and unexpected turns.

A major facet of this release is its ever-present shamanistic vibe. From the nearly-primal throat singing intro to the EP’s first song, to the philosophical tone of the lyrics to even the album cover,which features a pale human with an open third eye and several mushrooms spreading roots all throughout his body, the band is clearly trying to spread their views on life and how it should be lived. In this way, Myco has the aura of modern day soothsayers.

The album also has a strong DIY vibe, thanks to an extensive use of keyboards and MIDI in place of other instruments. While this is usually a total turn off for me, the group actually holds my attention by pushing these effects to the absolute limit. They densely pack a ton of sounds together along with their guitars, vocals and drums until they have a total tsunami of psychedelia. I really appreciate hearing an artist take what’s available to them and work hard to make the absolute best of it.

Playing this EP makes me really crave for seeing this group perform live. I would love to hear how much they stretch their wings on songs like the already nine-minute “Need Some Space.” If Myco comes out to my town, you’ll be sure that I would be in the audience.